Routes in the US 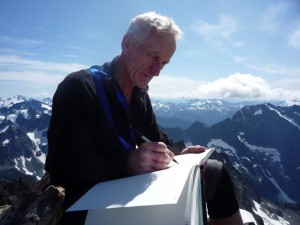 Dallas Kloke in his beloved mountains

Dallas Kloke lived near Mt. Erie. He has been climbing there for over 42 years. He wrote the original guidebook in 1971 and has just finished a new guide for the area. Unfortunately he died by a fall on September 25, 2010.

Mt. Erie is located 75 miles north of Seattle, Washington. It is not a huge area and has mainly moderate routes ranging from 5.5 to 5.11. The rock is diorite which is similar to granite in composition. Dallas has named his routes as a testimony and witness to his creator.